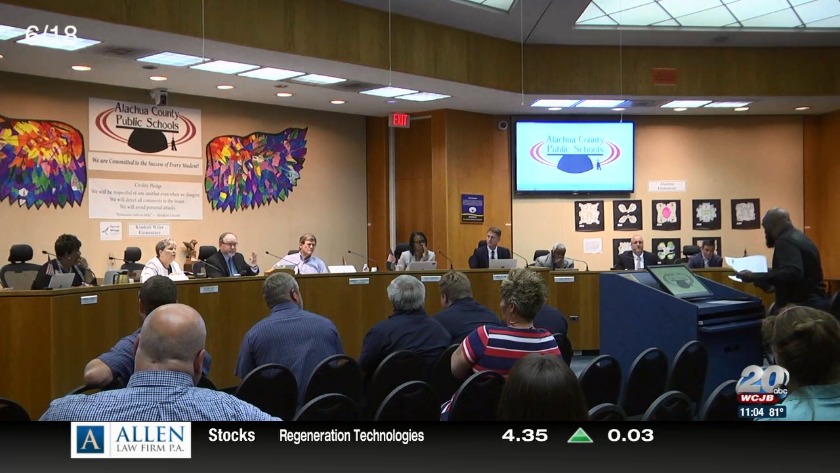 GAINESVILLE, Fla., (WCJB) -- UPDATE (06/20/2019 8:32PM) -
On Tuesday night a speaker at the Alachua County School Board meeting threatened a $100 million lawsuit; now the school system is responding, and that speaker's credentials are being questioned.

The school board is also questioning whether Ed Shepard is a civil litigations lawyer as he claims to be. Alachua County Schools' staff attorney filed an unlicensed practice of law complaint with the Florida Bar. TV20 has also been unable to confirm whether Shepard is a licensed attorney, either here in Florida or in North Carolina where his letterhead indicates his offices are located.

Shepard presented his letter of intent to file that $100 million lawsuit on Tuesday night; we'll let you know if and when that suit is filed.

You can read Jackie Johnson's full statement to WCJB TV20 below.

Below is our response to some of the comments made by Mr. Shepard:

Mr. Shepard’s complaints that he has not received a response to “more than 12” contacts in more than a month and a half from the district are completely false. We have had at least three staff members who have responded to his phone calls and emails in the last two weeks about speaking at a board meeting and to requests for ‘advice’ from our staff attorney.

Mr. Shepard also wanted to discuss our transportation reorganization plan and issues within the department itself. However, it was clearly explained to him that our transportation employees are represented by their union, the Alachua County Education Association (ACEA), and that to engage with him on these issues would constitute an unfair labor practice. In his undated letter to the School Board, which he presented for the first time at the June 18 School Board meeting, he also indicated he intends to form a new employee union. That may be so, but legally the School Board is limited to working with the ACEA, with whom it has had a long and productive relationship.

Within the Alachua County School District Department of Transportation, there are accusations of sexual harassment, inappropriate touching and rubbing and also the mistreatment and discrimination of drivers. These were all included in the letter of intent. And now the district will have 60 days to respond.

Ed James Shepard is a civil litigations lawyer that issued a letter of intent to the Alachua County school board at Tuesday nights' meeting.

"We're planning to sue the school board for $100 million dollars for labor disputes, labor violations, labor claims as well as an additional $30 million dollar lawsuit for sexual harassment against certain females that work in the transportation department who have been sexually harassed by the director himself," stated Shepard.

Shepard says that he feels that the school district has been brushing off the allegations.

"We've tried to make contact with the school board over 12 times in the past month and a half, they have not responded," stated Shepard.

Shepard started an investigation into the allegations about 8 months ago.

"Based on our investigation we got with another attorney in South Florida who is well known for civil litigations and he and I both believe that there is merit to these allegations and merit to actually file a civil suit," stated Shepard.

The school board will now have 60 days to respond to the letter of intent and Shepard says that if there is no response, that drivers are saying that they will either strike or walk off the job come the first day of school, and on that day Shepard says litigation will be filed. TV20 reached out to the spokesperson for the school district for a statement but have not heard back.

TV20 and Catholic Charities raise over $132,000 through virtual telethon

Gainesville prepares to use FirstNet during hurricane season

TV20 and Catholic Charities raise over $132,000 through virtual telethon

Gainesville prepares to use FirstNet during hurricane season