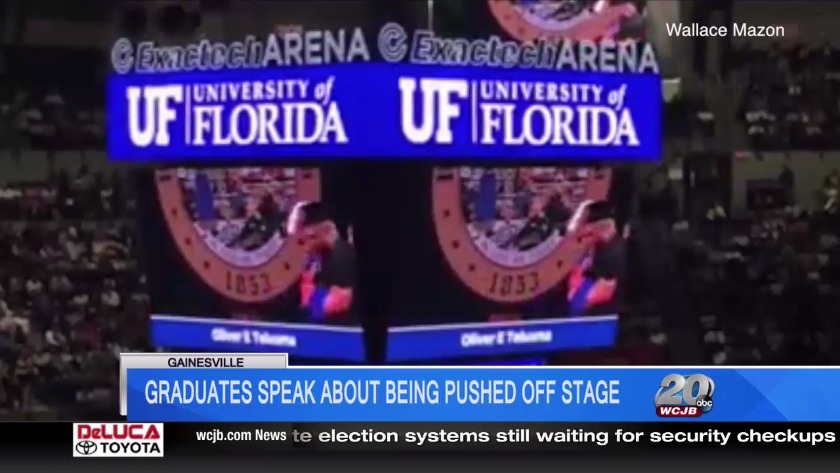 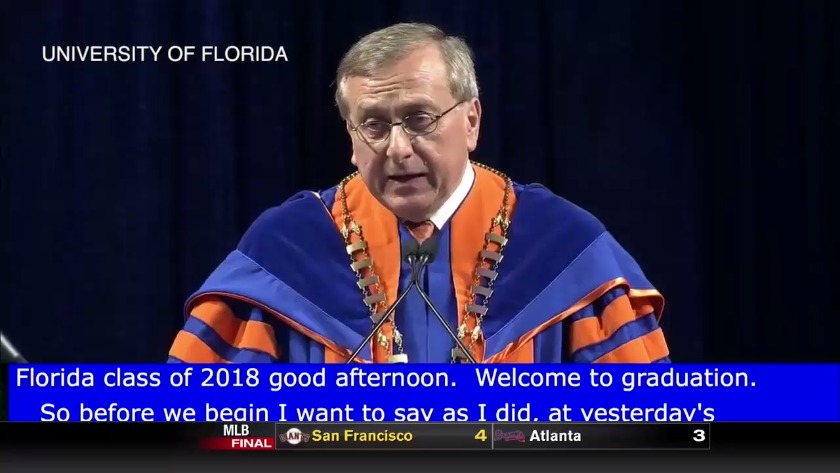 GAINESVILLE, Fla. (WCJB) - University of Florida President Kent Fuchs made personal calls and left voicemails for 21 graduates over the weekend, apologizing for the behavior of a faculty member seen forcibly pushing students across the stage.

"I had planned to do a dance on stage and celebrate this joyous occasion," said Nafeesah Attah, a UF graduate who was pushed across the stage before she had the chance to salute her sorority. "He pushed me forward, and then I kind of lost my footing a little bit and I lost my cap in the process of it."

Oliver Telusma is also one of the graduates who was pushed at Saturday's graduation, left with a voicemail by President Fuchs.

"I'm just appalled that we did this to you," he said in the voicemail. "I personally apologize that this happened at the very time that we call should be celebrating your accomplishments."

"I think his response is too little too late, very reactionary," said Telusma.

"He was sitting on stage but he didn't do anything to intervene," said Attah.

President Fuchs announced at Sunday's graduations that it wouldn't happen again. "I want you, our students, to know that we've changed that practice and I want you to know that we celebrate you, your graduation and your accomplishments."

"I feel like a lot more black students were targeted rather than our white students who did other moves such as back flipping or taking selfies on stage but didn't receive the same aggressive treatment," said Attah.

There is a video of what looks like a white woman being pushed as well, but Attah said the man was more aggressive with minority students.

"Looking back after the fact, it's like kind of embarrassing that this is my memory of my college commencement at UF," said Telusma.

University representatives have not identified the faculty member involved.

"We have asked our human resources and also this individuals college to investigate and to take appropriate action," said President Fuchs in the voicemail.

Videos of students being pulled off stage during a University of Florida graduation ceremony this past weekend are causing a stir online.

The footage shows multiple students attempting to dance while walking across the stage as they're projected on the big screen. Then an unidentified UF personnel is seen grabbing and rushing them off stage. The actions were met with boos from the crowd.

As the videos spread online, commenters have said the man's actions were unfair to the students and an unnecessary use of force. Others speculate it was racially motivated.

In response, UF President Kent Fuchs tweeted Sunday morning calling it "inappropriately aggressive" as well as apologizing and saying he would be reaching out to the students involved.

He followed up with another tweet saying, "the practice has been halted for all future ceremonies."